PPH Agreement between Canada and China to benefit Canadian innovators 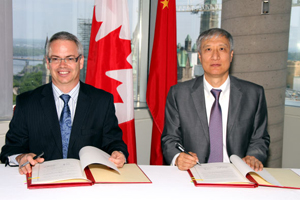 Underlining increasing economic participation between the Government of Canada and the People’s Republic of China, the intellectual property offices of both nations announced a pilot PPH agreement starting September 1, 2013 and lasting two years.

Sylvain Laporte, CEO of the Canadian Intellectual Property Office (CIPO), and Tian Lipu, Commissioner of the State Intellectual Property Office (SIPO) met in Ottawa to announce the agreement, which also included the signing of a Memorandum of Understanding (MOU). “The MOU and PPH will help simplify and expedite patent applications between our countries. This will help Canadian innovators bring their products to market quicker, which benefits both China’s and Canada’s economies,” said Mr. Laporte.

The PPH agreement with China will accelerate examination of patent applications if examination work has already begun at one of the national offices. Apart from accelerating the process, eligible applicants filing in both countries should find costs of patent prosecution reduced.

The agreement with China joins numerous other PPH agreements with countries such as the United States, Denmark, Germany, Israel, Japan, Korea, Finland, Spain and the United Kingdom. The program has been a success for CIPO, who cited an 100% grant rate for PPH applications, as well as a reduced number of office actions (an average of 0.6 compared to an average of 1.5 for all applications).

To learn more about how to take advantage of this program, do not hesitate to contact one of our agents.

We are happy to announce the launch of a mobile version of our site that will allow users to more easily navigate using their smar...

France Côté: Named one of the 8 key women in tec...

We are proud to announce that France Côté, co-founder and patent agent at BENOÎT & CÔTÉ, has been named one of the key wo...